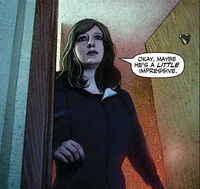 Margo Forysthe is the great-granddaughter of Margo Lane, an original agent of The Shadow's during the 1930s and '40s.

After the crime fighter traveled to the east to rejuvenate himself, a retreat which lasted several decades, he return to New York in 2013 and Forysthe became part of his modern day network of agents.

Once again, The Shadow and his organization were on the hunt for their old enemy, Shiwan Khan. It was during this confrontation when fellow agent Kyle Vincent betrayed the hero by locating Khan's granddaughter, Batu Khan, and involving her in his evil plan. Forysthe later killed Kyle when he and Khan's henchmen invaded The Shadow's hideout.[1]