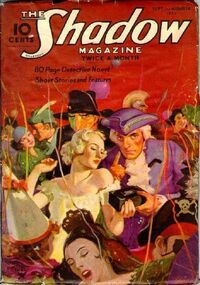 Louisiana is one of the many states that The Shadow travels to in his war on crime, as the tough port of New Orleans attracts all sorts swindlers, pirates and voodoo types.

Though The Shadow has killed several foes in this area, it should be noted that as an agent, Harry Vincent has done the same. Noted incidents include; in New Orleans, he and Lieutenant Wayson both fired their guns during a shootout, killing gangsters, Ring and Banjo. They also dropped henchmen, Craylon and Luder during the scuffle.[1]

Residents of Louisiana include: