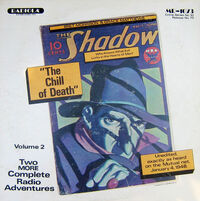 Louis Vittes was a scriptwriter who wrote for several mystery old-time radio shows during the 1940s and '50s. He was the staff writer for "Adventures of the Thin Man" and writer and creator of the "Peter Salem" private-eye series for the Mutual Broadcasting System. He also wrote a few episodes of "The Shadow" for Mutual.

Vittes would write for some of the earliest television series as well, including "Waterfront," "The Count of Monte Cristo" and "Rawhide." He later wrote the TV movie, "I Married a Monster from Outer Space."

Vittes' scripts for The Shadow were suspenseful horror stories populated by creepy characters who created elaborated plans to kill off their victims in order to gain inheritance or insurance policies.