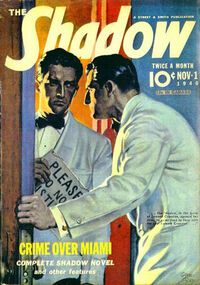 The real Lamont Cranston is a prominent man in New York. He's a wealthy world-traveler who The Shadow frequently disguises himself as when he is assuming a secret identity.

In their first meeting, Kent Allard, as The Shadow, threatened Cranston by stating that he knew various secret documents, which in turn, allowed him to take over the Lamont Cranston identity entirely.

Cranston has allowed Allard to impersonate him when he is abroad. This apparently works well, as Allard and Cranston bear a strong resemblance to each other. Not even Cranston's servants, or his own chauffeur, Stanley, are aware of the masquerade.

During one of Cranston's globe-trotting trips, he met Margo Lane on a Caribbean cruise. Two days later, she would run into him again at a New York night club. Or, so she thought. She actually mistook the disguised Kent Allard for Cranston and assumed that he was the same man who was on the boat. Eventually, she would prove to be a useful companion and The Shadow brought her into his network of agents.

In later years, Cranston became a criminologist and was in charge of The Shadow's network of agents while Kent Allard was on a secret assignment elsewhere. [1]