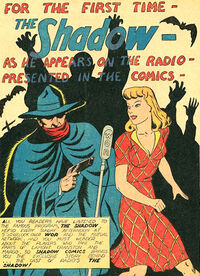 The Shadow, mysterious character who aids the forces of law and order is, in reality, Lamont Cranston.

Years ago in India, Cranston learned many strange secrets from a Yogi priest, keeper of the the Temple of the Cobras at Delhi. He taught him the power to "cloud men's minds" so they cannot see him.[1]

He is never seen only heard.

With his lovely companion Margo Lane, Cranston has dedicated his life to righting wrongs and fighting evil as The Shadow. It should be noted that Margo is the only person who knows The Shadow's true identity.