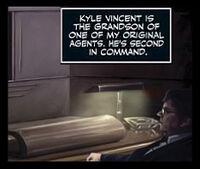 Kyle Vincent was a modern day agent of The Shadow's network who betrayed the crime fighter when it was revealed that he was really working alongside their enemy Shiwan Khan.

Kyle was able to locate Khan's granddaughter, Batu Khan, and involve her in his evil plan. A fellow Shadow agent, Margo Forysthe, later killed Kyle when he and Khan's henchmen invaded The Shadow's hideout.[1]