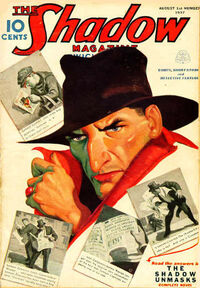 During World War I, Kent Allard was an aviator in the air forces of the United States. He was known as "The Black Eagle" because of his fondness for flying at night. When he faked an air crash behind enemy lines, he became a secret agent and set up an espionage network. He located maps of several enemy air bases and entered prison camps to guide the men in their escape. He later escaped with one of the enemy's own planes, flying back to safety to France.

It was during the war in which he would meet his most trusted agent, Cliff Marsland, in Paris. However, the details of their war adventures together are now lost.

After the war, the world-famous aviator rejected the idea of becoming a soldier of fortune and considered warfare an uncivilized institution except when absolute necessity required it.

He resolved to bury his "Allard" identity, and flew South and landed purposely in Guatemala, though news reports indicated he crashed somewhere in Central America and was lost. He spent a few months among the Xincas and gained their friendship. He finally came home, disguised so none could recognize him. Of course, in reality, he began fighting crime as The Shadow.

To confuse the crime world at large, he impersonates wealthy world-traveler Lamont Cranston as his own secret identity when the real Cranston is out of the country. Allard had once known Cranston, whose hobbies include exploration and aviation. By adopting his appearance, it gave him all the advantages that he needed. Apparently, this works out very well, as Allard and Cranston bear an uncanny resemblance to one another.

The Shadow has recruited a network of agents to assist him in his war on crime. Although he is a completely good hero, shrouding himself in mystery gives him the upper hand when dealing with criminals. It is up to those who understand him to play the game as The Shadow wants it. He demands unquestioning obedience from those who work for him, otherwise they'll face certain consequences. His ways must remain unknown.

The Private Life of Kent Allard

On rare occasions, Allard participates in some "Shadow" adventures as himself, the celebrated aviator.

Years ago, Allard flew to South America and intentionally crashed in Guatemala. Society believed him to be lost, or dead, due to the accident, but he actually became the white god of a tribe of Xinca Indians. He used his "disappearance" as a cover in order to come back to New York to fight crime as The Shadow.

When Allard finally made his returned to New York public, he was welcomed back amid much fanfare. There was even a parade for the missing pilot. He then took residency at a local hotel, with two faithful Xincas as his servants.

He's met Commissioner Ralph Weston and has also been introduced to the Cobalt Club. Thus gaining access to the same people that (the real) Lamont Cranston knows.

Later in life, Allard faded into history as a forgotten war hero, but as The Shadow, his fight against crime is never ending.