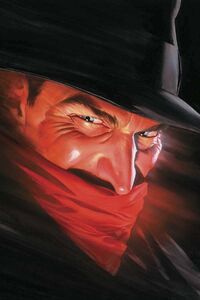 In 1913, he embedded himself in Czar Nicholas II's inner circle and gained access to the Romanoff jewels. He was able to trick Rasputin, a mad monk in the court of the Czar, into trading the gems for an ornate dagger. Amid the jewels was a Girasol ring, which is rumored to house "the power of a star." [1]

During World War I, Allard enlisted in the armed forces of the United States. He did his basic training at Fort Dix and then was stationed in France. In fact, he and Cliff Marsland first met during the battle of Verdun. The two also had an early encounter with the villainous Shiwan Khan, however, the details of this adventure are now lost.[2]

After the armistice of 1918, the public believed Allard had died in Flanders Fields. He has officially been listed M.I.A.

On a secret mission in 1920, he was called upon by Madame President Edith Wilson. She granted him permission to travel East and study from the old masters the mystic arts and master the powers of the Girasol ring he obtained in Russia. It was through his training, that he gained his mystic power of clouding men's minds and reading their hearts.

He later returned to New York, fighting crime as a merciless, black clad vigilante, The Shadow.

To assist him in his war on crime, he has recruited a network of agents. They have all made commitments to do what's right and see their mission to the end, even if it means walking through Hell for the rest of their lives.