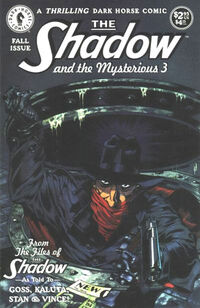 Kent Allard was a crime fighter who fought against corruption during the 1930s and '40s. Be it, mobsters, monster-men, Nazi's or his arch-enemy, Shiwan Khan, he was resilient in ridding the evil which lurked in the hearts of men.

In the East, he was trained in the mystic arts by Marpa Tulku, a Tibetan monk. After his teachings in the paranormal, Allard returned to New York, fighting crime as a merciless, black clad vigilante, The Shadow.

He recruited a network of agents to assist him in his war on crime. All of them made commitments to do what's right and see their "masters" mission to the end.