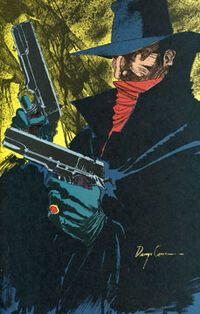 Kent Allard was a world-famous aviator who fought over the battlefields of Germany in the first World War. He was later awarded for his services with several medals and was able to keep the plane in which he fought in. During the Russian Revolution, he was enlisted by the Czar's family to investigate rumors of them conspiring with the Germans. He cleared their name and was given a ring, the fire opal, as a token of gratitude. He was later reassigned and became an adventurer and ended up in Shamgri-La where he was hired by Lamont Cranston for a shipping job.

Unknown to Allard, Cranston was smuggling drugs. About three hours into the trip, Allard noticed a fuel leak in the plane. Hearing that Allard wanted to dump the cargo to preserve fuel, Cranston threaten the helpless pilot with a gun. Nonetheless, the gas did run out, and the plane crashed somewhere over Tibet.

Both men lost consciousness, but when Allard awoke later, he realized he had no injuries. He later learned that he was "reassembled" by a strange technology that was centuries ahead of his own. He was also introduced to a new city, Shambala.

Shambala was a scientifically advanced city-state hidden deep in the Tibetan mountains. It was there where Allard met Rudra Cakrin and fell in love.

Lamont Cranston, on the other hand, was also involved in that fateful plane crash over Tibet. Like Allard, he too was taken to the mysterious city, Shambala. Since he survived the crash without a scratch, he did not have any reconstructive surgery.

While Allard was healing from his wounds, Cranston proved to be a threat to the Utopian city by killing some of his benefactors. He then took Rudra Cakrin as a hostage and forced Allard, once again, to pilot a plane for a smuggling run, this time with gold bullion bars. During the flight, they went back to the original crash site to pick up the abandoned heroin. Once there, Allard pushed Cranston off the snowy peak, leaving him to die.

After the dirty deed, Allard flew back to Shambala with Cakrin. She continued to put him through training, making him a paladin and teaching his mind to travel beyond his body, to become a true shadow warrior. When he finally left Shambala, he became the lost city's ambassador.

Back in the states, he became a mystery man and began his crime fighting campaign as The Shadow until he retired in the early 1950s.

Thirty-five years later, The Shadow's agents were being ruthlessly murdered one by one. This brought him out of retirement. Accompanied by two of his older agents, Harry Vincent and Margo Lane, and a few new agents, The Shadow discovered that Lamont Cranston was still alive. It seems after his fall from the mountain top, he was then rescued by a Russian who nursed him back to health. Six years later, he sneaked back into the United States, and laid low for a while, even changing his name to "Preston Mayrock."

It was he who was killing off The Shadow's agents as revenge for their earlier exploits and for Allard adopting the Cranston name thereafter.

The two foes confronted one another, and The Shadow avenged his fallen comrades by killing Cranston once and for all.

Now out of retirement, The Shadow continues his mission of ridding the world of its vipers, as for the citizens New York City, god help the guilty.