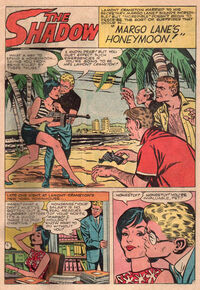 John Rosenberger was a comic book artist whose career stretched through four decades and covered nearly every major comic book publisher. During the Golden Age of comics, he was a freelancer and worked on several crime, western and adventure titles for various publishers. Between 1960-1975 he illustrated several superhero and romance titles including the first two issues of a short-lived iteration of The Shadow. In late 1966 he stopped working with Archie Publications and was hired at DC Comics. At DC he drew a number of features for their Superman titles. Prior to his death, he began assisting on a number of King Features newspaper strips.