The Shadow, The Phantom Sheriff 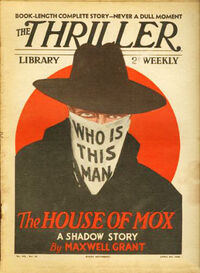 The Shadow, The Phantom Sheriff
Aliases

John Harverson, a wealthy Englishman, was unwittingly involved in an embezzlement scam and sent to prison because of it. It was actually his business partner, Simon Gregory, who spent their client's investment funds for his own purpose. Unfortunately, Harverson was wrongly accused and found guilty because he couldn't prove his innocence.

While in prison, Harverson learned that his former partner was continuing his financial swindling schemes. Even more tragically, Gregory successfully lured Harverson's son into the mess as well. Both men were rumored to have disappeared into the underworld together.

With this knowledge, Harverson became a changed man, literally. He escaped from prison and began acquiring a new fortune under the name "Lamont Cranston". It is during this time that he began hunting for his son and Gregory as The Shadow. He continues to seek the two fugitives while investigating other crime cases.

Retrieved from "https://thelivingshadow.fandom.com/wiki/John_Harverson_(Thriller)?oldid=14761"
Community content is available under CC-BY-SA unless otherwise noted.