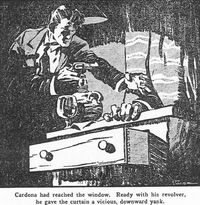 Joe Cardona is a good, honest cop who works for the New York City police force. He began his career as a detective, but was later promoted as a higher ranked acting inspector when Wainwright Barth took over as commissioner.[1] He became a full fledged inspector soon after.

Though they work independently from one another, he and The Shadow are unspoken allies. Cardona understands the power of The Shadow. He knows that The Shadow prefers to shroud his work in darkness. He knows that the master sleuth will aid him in the future, so long as his mighty hand remains unknown.

During an investigation, any knowledge that Cardona learns is received as a tip-off from The Shadow. Often, The Shadow, disguised as Fritz the janitor, mops around Cardona's desk glancing at evidence, overhearing conversations or leaving clues.

Throughout his long career in law enforcement, Cardona has seen positive proof of The Shadow's prowess. In fact, he owes his life, not once, but several times, to The Shadow's intervention. The mention of such a personage in Cardona's reports always arouses the ire of Commissioner Weston.

For years, Cardona has worked alongside his longtime right-hand man, Sergeant Markham, who replaced his earlier predecessor, Detective Sergeant Mayhew.

Cardona is also a trusted friend of newspaper reporter, Clyde Burke, a Shadow agent. The Inspector often gives Burke inside information, and in turn, the reporter informs The Shadow with facts and knowledge about a case.