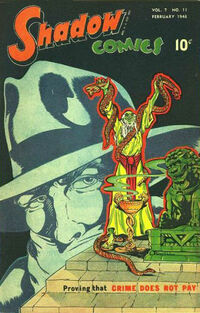 Joe Bates Smith was a stage performer, playwright, radio and television scriptwriter, who wrote more than a dozen of "The Shadow" and "Doctor Christian" shows in the 1940's. Several of his Shadow radio scripts were adapted in comic book form for The Shadow Comics.

He was a student at the University of Michigan and became a member of the Harlequins (a theatre troupe) when he was in Sandusky. When he moved to New York in 1932, he gained fame in the radio circles as his plays began to be produced for stage and the air waves. He was in charge of the radio program, "Echoes of New York," and was in complete charge of all radio programs emanating from the 1939 New York World's Fair.

He also starred and wrote several plays which were produced on Broadway, such as "The Devil Takes a Bride," and was a scriptwriter for the famous radio serial "Death Valley Days."

In the 1950s, he prepared a handful of scripts for the Kraft Television Theater, one of the oldest running television shows at the time, as well as writing an episode for Alfred Hitchcock Presents and the 1954 TV pilot of Mandrake the Magician.

In March of 1968 he died in his hometown, Sandusky, Ohio.