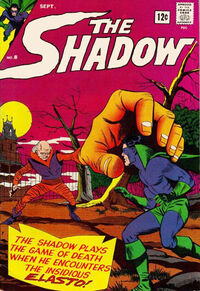 Jerry Siegel was a comic book writer who is best known for being the co-creator of Superman. During the 1960s, he was writing for several comic companies, including Archie Comics, where he created the campy version of The Shadow. The series was drawn by Paul Reinman and have become infamous for their lack of any resemblance to The Shadow's pulp stories. He was inexplicably transformed into a superhero, complete with a green and blue suit, cape, secret gadgets and hypnotic powers to brainwash his villains.