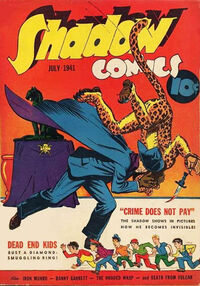 Jerry Devine was a radio writer, producer and playwright who wrote for a number of radio shows between the 1930s and 1950s, including several scripts for The Shadow Radio Show.

During the 1940-1941 season of The Shadow, all scripts were written by Devine except for the September 29, 1940 episode. In that season, only "The Leopard Strikes" was adapted in comic book form for The Shadow Comics.

Devine's scripts for the show were mostly "who done it mysteries" and very formulaic. Often The Shadow would save nobody in the episode, as the majority of suspects would be killed off by the murderer. Being the last man standing, the villain would be revealed and then commit suicide once The Shadow cornered him. The producers loved the simplicity of Devine's scripts, and would present them to other writers as a sample of how to write the radio show.

Before becoming a writer, Devine played supporting roles in a handful of silent features between 1920 and 1924. He also appeared in one sound film, "The Mad Game" (1933). During the 1940s, he became a comedy writer for Kate Smith and Tommy Riggs before turning his interest towards thrillers and crime dramas, such as "Mr. District Attorney" (1942-1945) and "This Is Your FBI" (1944-1953). During the 1950s, he wrote teleplays for various TV series, and later still, penned scripts for Broadway productions, "Amorous Flea," "Children of the Wind" and "Never Live Over a Pretzel Factory." In 2011, his play, "Curtain Calls," which was based on his childhood, was performed by California Artists Radio Theatre.