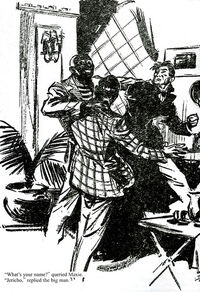 Jericho Druke is The Shadow's only African-American agent. He is a rather large man, and doesn't bother with ordinary weapons. Empty-handed, he can deal with several men as easily as two, because he usually just grabs his foes, and bangs their heads together.

He is one of the few Shadow agents that has a "real" job. He runs an employment agency in Harlem and is also a doorman at the Club Galaxy.

When Druke was working at the club, two killers made their getaway after rubbing out a fellow mobster. A third thug smacked Druke over the head with a blackjack. When the giant man came to his senses, he heard shots and then saw The Shadow. His intervention saved Druke's life. Sometime later, Harry Vincent brought Druke into The Shadow's unit.