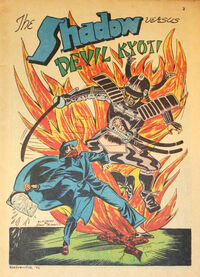 Jack Binder was a prolific comic book artist during the Golden Age era.

He was the creator of the original comic book Daredevil (not to be confused with the Marvel character of the same name), for Lev Gleason Publications' Silver Streak. He is also the older brother of Otto Binder, of Captain Marvel fame.

By 1942 Binder had opened his own artwork shop, employing over fifty artists, who produced material for several publishers including Street & Smith's Doc Savage, Super-Magician Comics and Shadow Comics. He is also believed to have created Street & Smith's caped-hero, The Hooded Wasp.

His first work for Shadow Comics was issue #11, illustrating the "Danny Garrett" stories.