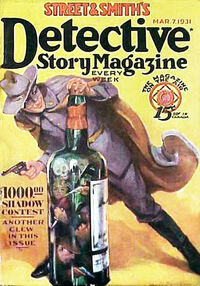 Henry W. Ralston began working at Street & Smith in 1898. He rose through the ranks and become Vice-President of the company.

From there, Blackwell hired writer Walter B. Gibson who was friends with one of the editors at Street & Smith, Lon Murray. John Nanovic, a newly hired editor, was to helm the new magazine. He began collaborating with Gibson on the stories. The three men; Ralston, Nanovic and Gibson, met together for some thirteen years to plot each of The Shadow's novels.