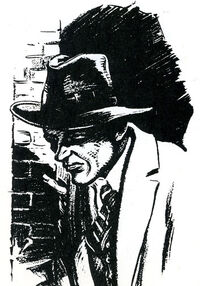 Hawkeye is a reformed criminal. After finishing his stretch in prison, he was under the care of Criminologist Slade Farrow.

Being a crafty little fellow, and suspicious of everyone, Hawkeye gained fame as the cleverest spotter in the underworld. He once encountered The Shadow as an adversary in an unrecorded adventure. Perhaps it was this confrontation which led Hawkeye to be imprisoned for three years. While behind bars, he met Cliff Marsland, who was convicted for a crime he did not commit.

Now with his days of crime behind him, Hawkeye takes orders from The Shadow. He often partners with Marsland, who works for The Shadow as an undercover mob lieutenant.