The Shadow Wiki
Register
Don't have an account?
Sign In
Advertisement
in: Characters, Templated Articles, Secret Identity,
and 11 more 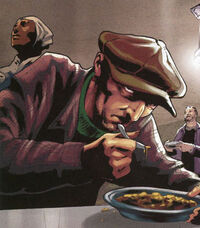 Agent of The Shadow
Characteristics
Gender

Hawkeye is a reformed criminal who gained fame as a spy throughout the underworld. With his hunches, and being suspicious of everyone, he is known as the cleverest spotter in the business.

Now with his days of crime behind him, Hawkeye takes orders from The Shadow, however, how he was enlisted as one of The Shadow's agents is unknown at this time. He's often keeping a close eye on various people to whom The Shadow believes to be of a suspicious nature.