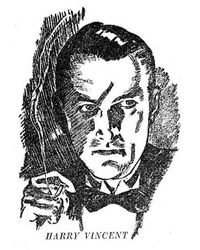 Of all The Shadow's agents, Harry Vincent is arguably the most versatile. Originally from St. Joe's County in Michigan, Vincent's career as an agent of The Shadow begun on one eventful night in New York when he was on the brink of suicide. When he was about to throw himself from the parapet of a bridge, The Shadow saved him. Since then, Vincent has obeyed the commands of his mysterious rescuer faithfully in every respect.

Confidential assignments to Vincent are not likely to go awry. In point of service, Vincent is the senior agent and he has been assigned several tasks. His main objective is to be a man about town and take up leads in the fashionable districts. He is also quick at making friends and gaining the confidence of others who happen to be involved in the case The Shadow is working on.

It doesn't matter if he's in town at the Metrolite Hotel, or vacationing at his home in Michigan, he merely awaits The Shadow's bidding to begin new work in the ceaseless struggle against crime.