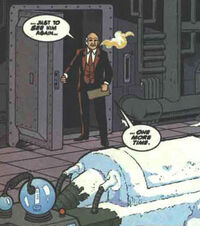 Harry Vincent is the most loyal of The Shadow's network of agents.

Not many of his adventures from the 1930s have been documented, however, he was The Shadow's "keeper," when the crime fighter had himself entombed inside a "sub-freezing" capsule in 1954. For several decades, Vincent kept watch over Cranston's deep sleep, until he received an urgent message from Tibet, warning of a demonic spirit being unleashed from Arcadia, the same place where The Shadow learned his mystical teachings.[1]