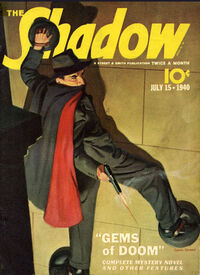 Graves Gladney was a pulp magazine artist who illustrated several covers for Street & Smith magazines, such as The Avenger, Crime Busters, Mystery and most notably The Shadow, for which he painted seventy covers.

He replaced The Shadow's cover artist George Rozen in 1939 and gave the magazine a more realistic and modern look throughout the 1940's. Unlike Rozen's "poster-style" covers, Gladney depicted actual scenes that Walter B. Gibson had written in the stories featured inside.

Gladney was never happy working in the pulps, and eventually left them altogether. He later become a teacher at Washington University School of Fine Arts while continuing his artistic passion as an accomplished portrait artist.