The Shadow Wiki
Register
Don't have an account?
Sign In
Advertisement
in: Publications, 1995, December, Modern-Age,
and 12 more

Ghost and The Shadow Vol 1 1

"Ghost and The Shadow" 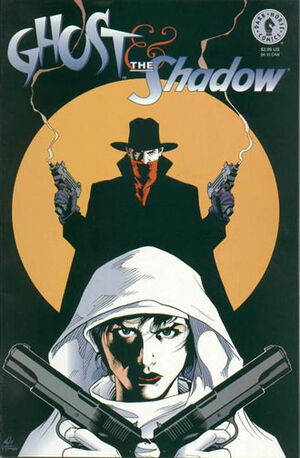 Appearing in "Ghost and The Shadow"

Synopsis for "Ghost and The Shadow"

Harry Vincent receives an urgent message from Tibet, warning of a demonic spirit being unleashed from Arcadia, the same place where The Shadow learned his mystical teachings. The evil spirit is encased inside a statue of a jaded goddess and a dishonorable Tibetan Monk wants Ghost, a paranormal hero, to animate the idol to life so that he can control the essence of evil. Of course, by forcing Ghost to undertake this task, having her soul locked inside the statue, she will die -- as her weakness is jade.

The monk kidnaps Ghost's sister, thus holding her for bait and waiting for the rescue. Meanwhile, The Shadow becomes involved in the case and realizes a profound coincidence when he hears that the monk has kidnapped a woman named Margo.

After meeting one another and comparing stories, The Shadow and Ghost confront the monk and his henchmen, shooting it out in the sewer tunnels until The Shadow makes the dramatic rescue of Margo, Ghost's sister.

During the tussle, a henchman threatens the monk by gunpoint, telling him to leap his astral self into the jaded statue, in order to animate it and then attack the two heroes. Though unwillingly, the monk complies, and the statue comes to life striking Ghost first. Following The Shadow's advice, Ghost absorbs herself within the evil goddess, sealing herself inside the jade. She knows this will kill her, but trusts that The Shadow can free her before she dies.

As Ghost is struggling to have the evil not take her soul over, The Shadow begins to shoot up at the underground ceiling and walls, causing a major collapse of the sewer tunnel. The jaded statue shatters, Ghost is released from it and quickly teleports her and her sister above ground. Now safe, the two sisters notice that the man who saved them as disappeared into the shadows.