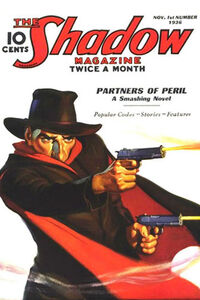 George Rozen was a pulp magazine artist who is best known for his dynamic "poster-art" style paintings that graced many of The Shadow Magazine covers. Several of his covers were later featured on various Shadow Comics, also published by Street & Smith.

George's twin brother, Jerome George Rozen, worked on The Shadow Magazine too. He contributed a handful of covers in 1931, and George took over in January of 1932 when Jerome was injured in an automobile accident.

George continued painting his realistic portraits of The Shadow until he was fired. Eventually, he was rehired once again and illustrated a few more covers for the magazine in 1949, before the series was canceled that summer. 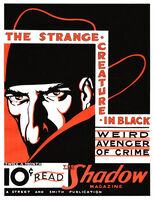 An early ad for the Street & Smith publication.

The illustration was used for The Living Shadow hardback.