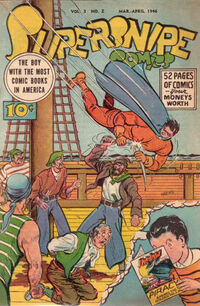 George Marcoux was a newspaper cartoonist during comics' Golden Age who is best known for creating "Supersnipe: the boy with the most comic books in America." Supersnipe was actually a kid named Koppy McFad who loved his comics. "He read 'em, breathed 'em and slept 'em." In fact, he wanted to be a superhero himself, and the superheroes that he daydreamed about often starred in his own publication, Supersnipe Comics.

Supersnipe, debuted in Shadow Comics #15, published by Street & Smith. The Shadow also appeared in a few Supersnipe Comics, sometimes in in own story, but more frequently in Koppy's daydreams whenever he fantasied about being the pulp hero.