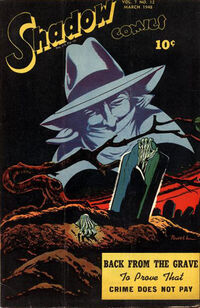 Frank Kane was a prolific pulp writer, best known for his mystery novels about the adventures of Johnny Liddell, a tough private eye who tangled with mobsters, molls and murder in New York City.

Before becoming a writer, he was a graduate of the City College of New York, and then attend law school. Before graduating he became interested in journalism.

In the mid-1940s, he began penning hundreds of scripts for popular radio programs, including six years as the writer for The Shadow Radio Show.

Throughout the 1950s and 1960s, he wrote about 40 crime books, and an abundance of short stories, most featuring Johnny Liddell, who also appeared in various pulp magazines. CBS approached Kane about adapting, Johnny Liddell for a TV series, but that never came to be. However, in 1958 he ended up writing for the network's Mickey Spillane's Mike Hammer series. Most scripts could be seen as Liddell adaptations.

In November of 1968, he died at his home on Long Island, New York, the victim of a heart attack. He was 56 years old.