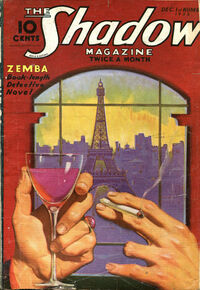 France is one of the many European locales that The Shadow travels to in his war on crime. He spent much of his time in the beautiful city of Paris during World War One and is very familiar with the area.

Cliff Marsland, who later became one of The Shadow's most trusted agents, was also a spy during WWI. He and Kent Allard met in the French village of Esternay in 1918.[1] The details of their war adventures together are now lost.

Commissioner Ralph Weston also served in France as an American army officer in WWI, however, he wasn't aware of Marsland or The Shadow until years later, when he became commissioner of New York City.

Resident's of France include their greatest detective, Etienne Robeq.[2]