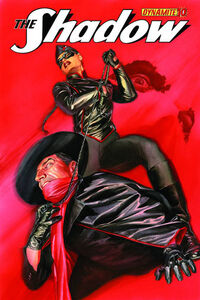 Major Esmeralda Aguilar, better known as The Black Sparrow, faced The Shadow as a foe during the Spanish Civil War.[1]

Prior to becoming enemies, she and Cranston were introduced to one another at a party hosted by Ambassador Hector Ramirez. Cranston was looking for gunrunners at the time and she was the Ambassador's Military Advisor. The two hit it off, which led to a one-night stand.

It was later revealed that Ms. Aguilar, as the costumed Black Sparrow, was part of the gun smuggling operation that The Shadow was trying to thwart. The sales from the guns allowed funding for her plans of restoring Spain's monarch. She wanted to be the nation's ruler and was the real power behind the villainous "El Rey"[2] who was only a puppet leader.

When The Shadow confronted her at El Rey's castle, she became trapped on the rooftop of the fortress. There, she and The Shadow challenged one another. With nowhere to run, she tried to convince him to rule Spain at her side, for she believed they shared the same convictions and belonged together. The Shadow allowed her an embrace before he pushed her over to her apparent doom.[3]

However, she was able to grab onto a gargoyle protruding from the building, cling to it, and then safely climb down to solid ground.[4]

She later resigned from her commission and became an international cat burglar.