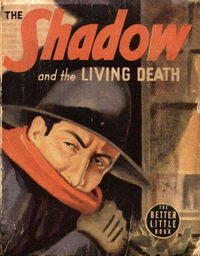 Erwin L. Hess was a comic book artist for Dell Publications from 1939 throughout the 1940s. He was the interior illustrator for Whitman Publishing which included the three Shadow titles by Better Little Books®: The Shadow and the Living Death, The Shadow and the Master of Evil and The Shadow and the Ghost Makers. He also painted two of the covers from the same series.