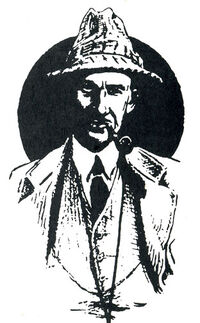 Inspector Eric Delka, of Scotland Yard, is a sharp-faced, ruddy-complexioned man. His forehead shows long furrows. He is brawny, the sort of officer who can handle violent opposition; but his ruggedness is dominated by his keen manner.

He was once kidnapped by Rigger Luxley's gang when he was sailing to America in order to meet with government agent Vic Marquette, police Detective Joe Cardona and Senator Ross Releston. The group of men were safeguarding secret plans and trying to thwart the attempts of an international spy ring.

When it was discovered that Delka was secretly replaced on shipboard, to be killed later by his kidnappers, The Shadow came to his rescue.

Since then, Delka has worked with The Shadow whenever they share a case in England or Europe. Delka is also good friends with Lamont Cranston, though he is unaware of any connection between him and the cloaked vigilante.

Like Joe Cardona of the New York police and Vic Marquette of the United States secret service, Delka realizes that he is one of a chosen few who has gained The Shadow's confidence. He understands his part in aiding The Shadow; and in so doing, he has gained a powerful ally.