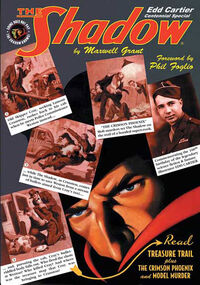 Edd Cartier was a pulp magazine illustrator who became the second regular artist to pen and ink the interiors of The Shadow Magazine.

He studied at Pratt Institute in Brooklyn. There he met Earl Mayan, and the two were encouraged to illustrate for the pulps. After graduating in 1936, he and Mayan shared an art studio and Cartier was immediately hired as an illustrator for The Shadow.

At first, he and the previous Shadow artist, Tom Lovell, shared art duties on a few issues from mid-1936 through late 1937. Cartier took over from there, and created over 800 drawings for the magazine.

When Cartier resigned from The Shadow in 1940, it was his friend, Mayan, who became the next artist to illustrate the publication.