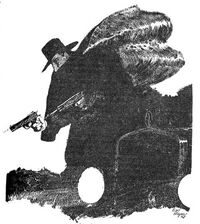 Earl Mayan was an American illustrator who's best known for his hyper-realist style.

In 1940, Mayan was hired by Street & Smith to illustrate The Shadow, as he replaced his friend, Cartier, who had resigned after working for the publication for the last four years.

Mayan's Shadow stint was quite short due to being drafted into WWII a year later.

After the war, he continued as a pulp illustrator, but soon found better work when he became a freelance illustrator for the glossier "slick" magazines.

Later in life, he worked as a cover artist for paperback books and illustrated for several men's adventure magazines. He also became a teacher at the Art Students League of New York and began to write his memoirs and poetry while continuing his artistic focus on landscapes, portraits and abstracts.