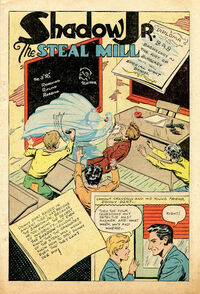 Donald Jordan, was the youthful sidekick of The Shadow. His father was a friend of Lamont Cranston. When Jordan's father was killed in Tibet, the youngster was adopted by a lama who taught him the secret of invisibility. When the Shadow was investigating the death of Jordan's father, Jordan helped him, and soon after become his sidekick.