The Shadow Wiki
Register
Don't have an account?
Sign In
Advertisement
in: Publications, 1990, March, Modern-Age,
and 17 more 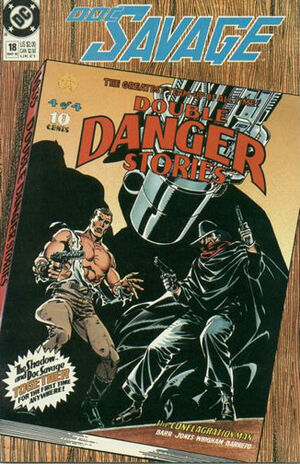 You would have done better to forsake your corrupt ways, minion of evil... The Shadow will not abide the touch of one such as you!

RECAP: When a gangster kidnaps a scientist, who's invented a special detonator "ray" gun, the scientist's daughter enlists the help of Doc Savage and his crew. However, unknown to Doc, The Shadow was already on the case as a disguised gangster named "Ombra." When the two met, Doc knocked out the disguised Shadow and took him back to his Crime College to operate on his brain.

While the two heroes confronted each other in the operating room, three of the Shadow's agents came to rescue their chief and were able to take down Doc's Fabulous Five rather easily. Finally, a "cease fighting" was called out and the two teams compared notes and realized they were both investigating the same kidnapping case. The two agreed to team up and swap some agents.

Doc Savage went off with three Shadow agents, and Renny, to a warehouse to thwart the gangster who kidnapped the scientist. There, they rescued the scientist who then informed them that his daughter had been captured by the hoodlum, Johnny Malone.

Meanwhile, The Shadow sneaked into Johnny's office to find out who was the ringleader behind the kidnapping. Johnny and his head henchmen entered the same room where the Shadow was hiding and made some phone calls. Outside the building, several masked men stormed the area with their machine guns firing. It was a hit. Johnny was shot, as were several members of his gang. The Shadow leaped out of the darkness, fired a few rounds, and made his escape.

Some minutes later, Doc Savage approached Johnny's building. He quickly noticed the carnage all around and a strange symbol scrawled on the wall, as if it were a calling card to a meeting place.

Doc Savage visits the Shadow at the Cobalt Club, as the "Cobalt symbol" scrawled on the wall was a clue to their next meeting. The two discuss who's behind the stealing of the scientist's special detonator "ray" gun and come to the conclusion that it's a munitions maker named Compton Moore. Their agents are then dispatched to several locations in hopes of finding Mr. Moore.

Later, agent Hawkeye discovers that Moore is going to set off a military panic by destroying the National Guard Armory with the detonator "ray" gun. He believes that the scientist's daughter will be tied up inside the armory.

The two heroes, and their agents, head for the armory together -- not realizing it's a trap. When they approach the armory, they don't realize that they're being watched by Mr. Moore, the scientist's daughter and several henchmen above, staked out on a nearby rooftop with the detonator "ray" gun pointing at them and the armory. The two heroes rush into the building, and the henchmen fire the gun, causing the armory to explode.

CONCLUSION: All those watching believe that Doc and The Shadow are dead from the explosion, however, they've made their escape through a manhole. While making their way through the sewer system, they find some of Compton Moore's thugs and capture one for interrogation.

Meanwhile, the agents and Doc's men head into the building where the ray gun was fired from. They take down a few henchmen while heading to the rooftop. When they reach the top of the building, Mr. Moore and the scientist's daughter take off in an autogyro (a small plane). As the two fly off, and make their escape, Doc Savage and The Shadow join their agents on the roof. The Shadow then hypnotizes his prisoner into confessing Moore's plans and whereabouts.

The next day, Moore reads in the paper that Doc and The Shadow are still alive, and he's not happy about this. He sends his men to kidnap Senator Jacobs from an Army base. After a brief struggle, the kidnappers take the Senator to a ship. It is on the ship where they realize that in actuality, they've kidnapped a masked Doc Savage.

Suddenly, laughter is heard on the waters. The Shadow comes for the rescue and leaps onto Moore's boat. With the henchmen distracted, Doc Savage attacks the kidnappers. Moore makes his escape by leaping in his own speed boat. Doc grabs the death ray gun and fires it at the fleeing man, and Moore is dead. The scientist's daughter then quickly takes the gun from Doc and aims it at her father. The gun backfires, and both are dead. Doc picks up the gun and states that he will take it back to his Fortress of Solitude. The two heroes then look over the dark waters and realize the war on evil may never end.