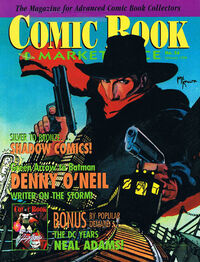 Denny O'Neil was a comic book writer and editor who wrote for DC Comics and Marvel for several decades. His best-known works include the DC titles, Green Lantern/Green Arrow and the Batman series. In the 1970s, he wrote The Shadow with artist Michael Kaluta. He was also responsible for the two Batman/Shadow crossovers, and also wrote the short-lived Justice. Inc. series which featured The Avenger, another Street & Smith pulp hero.