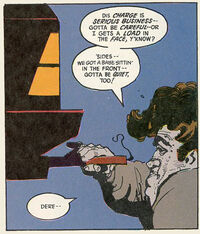 DeWitt Perez was a lowlife conman and son of a criminal informant who later became an agent for The Shadow.

His father, Black Mike Perez, was the proprietor of Black Mike's Bar during the 1940s. Back in the day, The Shadow frequented the saloon when he needed "information." After the death of his father, Perez took over the bar.

In 1980, The Shadow returned and informed Perez that he was now an agent and he needed his help in recruiting more "specialists." It was Perez who introduced The Shadow to Twitchkowitz, a pro wrestling trainer and narcotics expert. Perez also helped induct wrestler, Elton Butterfield into the ranks as well.