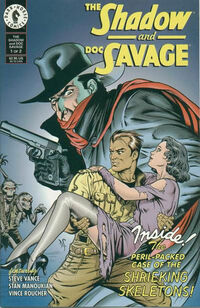 Dave Stevens career in comics began in 1975, assisting veteran artist Russ Manning on the syndicated Tarzan strips. In 1982, Stevens debuted the feature for which he is best known for, The Rocketeer. Initially appearing as a back-up feature in the second issue of an in dependent comic, the pulp-inspired story of Cliff Secord, a daring stunt pilot who finds an experimental rocket pack, became an instant sensation. The Rocketeer went on to star in his own comic book series. The three issue limited-series, The Rocketeer Adventure Magazine, featured Cliff becoming an operative for a shadowy pulp crime-fighter known as "Jonas."