The Shadow Wiki
Register
Don't have an account?
Sign In
Advertisement
in: Publications, 1989, February, Modern-Age,
and 8 more 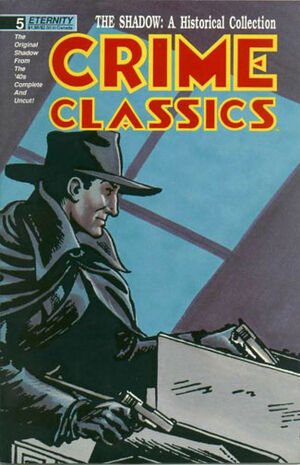 On Shark Island, a prison colony, The Shadow is trying to uncover a plotter of revolt who goes by the name of "The Dagger." When the prisoners break out, the leader, and a couple of his henchmen, find a boat and row to a nearby yacht. Once on board, they quickly seize the ship. The Shadow smuggles himself onto the same vessel and discovers several rifles and small weapons in crates. He also rescues a kidnapped daughter and the two of them team-up to fight off a few convicts. Meanwhile, The Dagger makes plans to meet up with a freighter to off load the yacht's cargo of weapons. By morning, he has transferred the weapons and made a deal with the skipper to blow up an American defense base on Shelter Island.