The Shadow of Wall Street 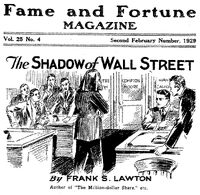 The Shadow of Wall Street
Identity

Nondescript
Unusual Features
His eyes are said to fluctuate from matte to shiny.
Status
Citizenship

When Compton Moore discovered for himself the crookedness of Wall Street shortly after partnering with Hiram Calhoun, he resolved to study the corruption and find a way to curtail it. He soon learned that his own partner was also tainted when Calhoun wanted their firm to take on an illegitimate transaction.

Moore managed to keep their firm from taking on the transaction, but Calhoun took it on himself in his own private dealings. (Likely referring to the secret market manipulations of the financier cabal whom Moore challenged in the story.) Moore, with his confessed flair for melodrama, adopted the guise of The Shadow of Wall Street and sought to sabotage Calhoun and his cabal's schemes while providing insider knowledge about the stocks they sought to manipulate so that the small-time investors they planned to steal from made away with small fortunes.

Moore's identity as The Shadow was eventually discovered by John Hayden, a young aspirant hired on as Moore and Calhoun's secret secretary. When Hayden revealed his knowledge of Moore's secret after The Shadow struck a final blow against the cabal's schemes, Moore announced to Hayden alone that he was retiring from his run as The Shadow and returning his full attention to running his and Calhoun's business.