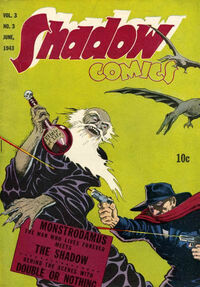 Enemy of The Shadow
Base Of Operations
Castle Chandos
Characteristics
Gender

Compeer Chandos was the strangest foe The Shadow ever fought.

Better known as Monstrodamus, he was an alchemist who controlled a variety of prehistoric and mythological creatures. Not only could he transmute base metal into gold, but with his Elixir of Life, he animated statues and ancient mummies, including Princess Theba, an Egyptian princess.