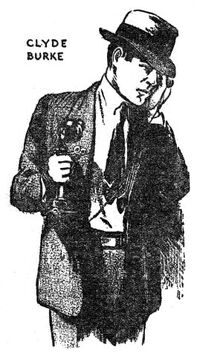 Clyde Burke is an ex-crime reporter who lost his job at the Evening Clarion when it was bought out by another newspaper company. The Shadow, while disguised as a criminologist named "George Clarendon," hired Burke to conduct a clipping bureau and relay information to him. Soon after, Burke agreed to be part of The Shadow's organization as a crime investigator. He was later offered a job with the New York Classic, a scandalous journal denounced by the conservative Cobalt Club members. He continues to work there while maintaining his loyalty to The Shadow.

As an ace reporter, all sources of news are open to him; his "scoops" have made him in demand by every paper in the country. Burke has also made several important contacts. He's very good friends with Inspector Joe Cardona, who trusts him and often gives him inside information. In turn, the reporter informs The Shadow with facts and knowledge about various cases.

Being in the service of The Shadow, Burke understands that his life is continuously at risk, however, he knows that he has the protection of his master, the man who wastes no lives, but saves many.