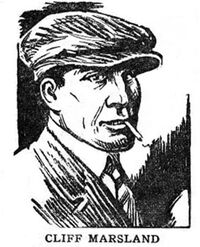 Widower
Occupation
Spy
Origin
Origin
Marsland is one of the toughest, both physically and emotionally, of the Shadow's agents and has a reputation of being a cold-blooded mob leader in the criminal world.
Creators

Cliff Marsland is one of The Shadow's most trusted agents. The two men first met during World War I, however, the details of this adventure are now lost.

In 1932 Marsland was released from Sing Sing, after serving time for a murder charge he did not commit. The real culprit was his fiancee's brother, the young Mr. Griscom. Marsland took the blame to ensure his fiancee's family would not endure any unnecessary strife.

Once out of prison, Marsland was sought out by The Shadow who quickly recruited him as an agent.

Due to his big size, rugged looks and a reputation of serving time, Marsland is able to infiltrate the underworld on The Shadow's behalf. He pretends to be a ruthless thug, a free-lance fighter and a gunman of high repute. To the criminal world, he owes allegiance to no gang. There is even a spreading rumor that he is gunning for The Shadow. The fact that Marsland is still alive seems to impress fellow mobsters, as mugs who usually talk about getting the crime-fighter often disappear mysteriously from the bad lands. Apparently, Marsland is too tough for The Shadow to get, a strategy The Shadow helped build up.

During his first case, Marsland and his fiancee, Arline Griscom, were reunited when he rescued her from kidnappers.[1] They later married, and the two settled down together. Sadly, Arline passed away a few years later.

After his wife's death, Marsland continued to serve for The Shadow as a watchdog in the underworld, often visiting the dives and hangouts frequented by various mobsters. Red Mike, the brawny, red-haired proprietor of The Black Ship and later his own notorious bar, is friendly to Marsland, due to him uncovering the stool pigeons who are unwelcome in his establishment.

Marsland is often assisted by a little hunched man who is also a Shadow agent, Hawkeye. Gang leaders believe it's probably Hawkeye who spots any trouble for him. No wonder Marsland has been able to play his hand without interference from the fighter in black. Unknown to the underworld is how these two unlikely companions actually work together as combatants of crime, by maintaining a contact between notorious racketeers and the king of crime avengers -- The Shadow.