The Shadow Wiki
Register
Don't have an account?
Sign In
Advertisement
in: Characters, Templated Articles, Secret Identity,
and 9 more 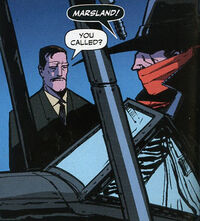 Agent of The Shadow
Characteristics
Gender

Cliff Marsland is one of The Shadow's most trusted agent. They met during the battle of Verdun in WWI. It was during the Great War that the two had an early encounter with the villainous Shiwan Khan, however, the details of this adventure are now lost.[1]

The two spies have a genuine friendship outside of their life of crime fighting. Marsland is aware of The Shadow's identity as Kent Allard, and understands how the bitter experiences of the war has defined his friend as a soulless man. He believes there might be a day when Allard can be himself, the celebrated aviator. However, The Shadow concludes this will never happen. In his mind, "Allard" had died in Flanders Fields.