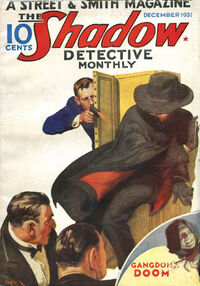 Single
Occupation
Insurance Broker
Origin
Origin
After being saved from financial ruin, he agreed to be a contact agent for The Shadow.
Place of Death

When The Shadow saved him from financial ruin, he enlisted him as his first contact agent.

His duties included gathering information from newspaper articles and other other agents. After preparing his reports, he would secretly drop them off at the B. Jonas Office Building.

While in Chicago on a job for The Shadow, Fellows' witnessed a mob execution and therefore he too was shot down in a drive-by shooting. He became the first, and only, agent to be killed in the line of duty.[1] Once captured, Machine-Gun McGinnis confessed to the actual slaying of Fellows. He later received the death penalty.

Fellows' duties fell to other agents, Rutledge Mann and Burbank.