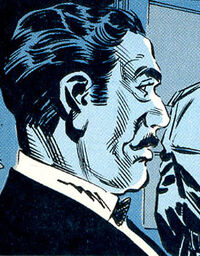 Agent of The Shadow
Base Of Operations
New York City (B. Jonas Office Building)
Characteristics
Gender

Single
Occupation
Insurance Broker
Origin
Origin
After being saved from financial ruin, Fellow's agreed to be a contact agent for The Shadow.
Place of Death

Claude H. Fellows was an insurance broker who became an agent for The Shadow. Fellow's agreed to be a contact man after the pulp hero saved him from financial ruin. He often gathers information from newspapers and other fellow agents. He would then prepare his reports and have them secretly dropped off at the B. Jonas Office Building.

During one of Shiwan Khan's revenge plots against his arch-nemesis, The Shadow, he kidnapped several agents, including Claude Fellows. Fellow's was taken to an underground chamber where he was later tortured and killed.[1] The Shadow found the dead agent in his own Sanctum, which had been invaded by Shiwan Khan. Needless to say, his killers did not go unpunished.

His duties later fell to another agent, Rutledge Mann.