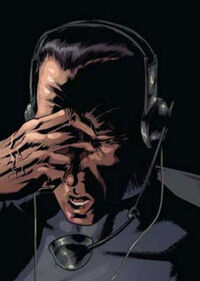 Burbank is one of The Shadow's most mysterious agents. Very little is known about his past or personal life.

Since he is quite skilled at electronics, wire tapping and tracking information, his chief duty is central communications for The Shadow.

Being a study-toned man, he mostly sits at a switchboard and relays instructions from The Shadow to the various agents in the field.

Though he is usually kept unseen, some may argue that he is the most vital of The Shadow's organization, as he is always gathering prepared reports, and is the only agent who is able to communicate directly to The Shadow.

Of all the agents, he is the most enduring. His duties are passive as a rule, but there seems to be no limit to the length of time that he can remain awake and ready, and always doing The Shadow's bidding.