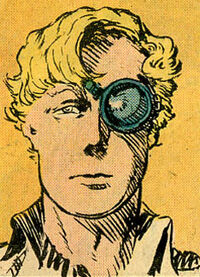 Burbank is the most mysterious of The Shadow's agents. Very little is known about his past or personal life. Since he is quite skilled at electronics, wire tapping and tracking information, his chief duty is central communications for The Shadow and his network of agents and gathering needed facts. It is unclear as to why he wore a modified jeweler's loupe during his younger days as an agent.