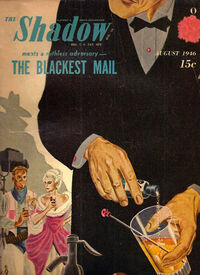 Bruce Elliott was a science fiction, mystery and television screenwriter during the 1950s. Prior to this, his first story was published in Street & Smith's Doc Savage magazine in June 1944.

After Walter B. Gibson's departure from The Shadow pulps, the writing chores were turned over to Elliott who was also writing Nick Carter stories for The Shadow Comics.